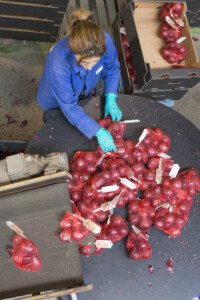 “The input installations of the Waterman Onions sorting lines needed to be replaced,” says Waterman Onions production manager Arjan Dunnewind. “A replacement like this in prospect naturally offers the opportunity to make another step in optimisation.” That is how Arjan started last year on what now forms the basis of the continuous production optimisation process.

Arjan previously discussed his plans to optimise the small-packaging- and supply- lines. Many of his projects have been implemented in the past year. “Now that the two supply lines are combined, it is possible to place seven bottom unloaders on the belt already filled.” Although this sounds like a minor adjustment, the result is that the amount of forklift operations has significantly been reduced, which influences the overall safety within the production halls and has had a very positive effect on the output of the sorting-lines.

“At the beginning of 2021, we started the Grean project”, about which we previously wrote this update, “during the project led by Menno Dijkstra, the focus shifted company-wide to proactive problem-solving.” Arjan continues his story. Arjan explains that the systematic approach to solving errors has paid off. “The optimisation of the tubes line has resulted in a doubling of the output.” 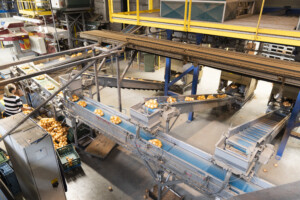 In general, the Grean project has had many positive influences on production and how solutions are sought. “Instead of treating the symptoms, we are now looking for the source of the problem” Arjan gives the general renewal of small packaging line two as an example, “here we have replaced two weighers for one new one, so we can now pack up to 7 tons per hour. “Even though these have been the most expensive replacements, Arjan is also very enthusiastic about the minor adjustments. “A great example of proactive problem solving is the automatic lubrication that we have added to many of our machines. As a result, not only does less dirt penetrate the moving parts, but the error messages are also greatly reduced.”

The many optimisation efforts that have followed each other in rapid succession over the past year have also resulted in many collaborations with Qmec, Burg Machinery, Van Hees Machinery NHL Stenden and Aeres, among others. The latter, a  university of applied sciences in Dronten is currently running a fieldlab-project in collaboration with Waterman Onions. It is investigated which adjustments need to be made to reduce the number of “rejects” in a packaging line.