Like our onions, athletes are true champions. And like sports, our onions are extremely healthy for you. Waterman is therefore proud to support several local sports events.

Two teams from Waterman recently participated in a company football tournament in Emmeloord, for example. The goal was to score points to beat cancer, which is exactly what we did, through our sponsoring contribution, but also on the pitch. We played a good game, but didn’t quite reach the champion’s podium.

And on Saturday, 14 September, we’ll be at the Fish Potato Run; the largest sports event in the Noordoostpolder, with more than 2,000 participants.

Sports and Waterman. Sports and Onions. A perfect combination. Both are active, and both are healthy. But don’t eat our onions just before you exercise, because that’s not always a good combination. 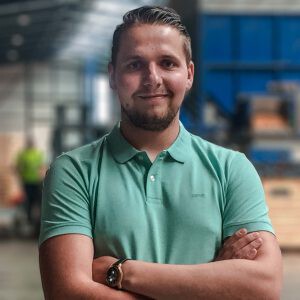 A typical Dutchman, or at least that’s his apperance. His name is also Dutch: Pieter Jaarsma. But once you start talking to him, you hear what seems to be a Dutchman (Frisian) speaking with a French accent. And you’re right. Our new colleague at the Sales department has Dutch parents, but he was born and raised in France…

“I grew up in the Bourgogne, in a real commercial family so commerce has fascinated me since an early age. That, and my love for the Dutch province of Friesland, where my parents are born and raised, convinced me to leave France and build a life in the Netherlands when I turned 21.”

True passion
After graduating from business school, he started working for the trade commission at the French embassy in Amsterdam. “That’s where I discovered my true passion: trade. And pioneering. Paying close attention and investigating what’s going on and what interests are at stake. And then making connections and building long-term relationships. It’s the best there is.”

That is also what he’ll be doing at Waterman: trading and pioneering in all of the overseas regions. Pieter will travel from Asia to the Middle East, the Caribbean, and South- and Central America. “My language skills will come in handy, just like the fact that I have a knack for mediating between different cultures. I adapt easily, and I feel at home just about anywhere in the world.”

Cheese sandwich
But he feels most at home in Friesland. “I’ve never lived there, but even when I was a little boy I’d tell people that I was Frisian. It’s just a feeling I have. I love the Dutch mentality. Open and direct. The French could learn a lot from that. But on the other hand, the Dutch could probably learn a few things about cooking from the French… There’s more to life than just a bland cheese sandwich for lunch ;)”